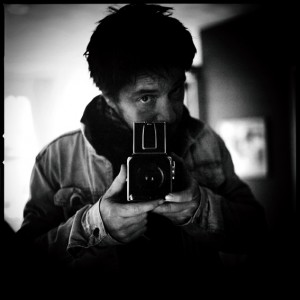 The photographs of Fabien Gruau are built up with different layers. Based on a classical approach (documentary for most of the series), captured with a middle format camera, it seems that poetry is never too far away when you meet his images.
From this combination reality/fiction, he can create singular stories as his series “My street” or « Portraits ». You become introduced, in a documentary styled way, to the life and variety of the people in a neighborhood in Amsterdam, or by collaborate with other artists into a street performance (ZUR, France). You feel the “nostalgia” in his interactive large-scale image-based performances accompanied with music « Les Aires ».
Beside of this specific approach , in his latest series called « Ruins », his work has taken a new turn.
This series is no less poetic than his previous ones, but the form of his photography has changed, its language is moving to a mediated collaged imagery. “Ruins” creates an abstraction within the reality.
His research reflect basically the authenticity, the self and in general the beauty that he can catch from what people and the environment can offer to his look.